The Mediterranean basin is the region of lands facing the sea with the same name. The region boasts exceptionally favourable climate conditions: average temperatures in winter range from +6 to +12 and in summer from +22 to +27. These values increase from north to south and from west to east, though never reaching the extremes felt by countries with continental climate. As a result the vegetation is always active, also in winter months.

One of the most characteristic occurrences in mediterranean countries is that of plants which flower all year round and unique winter bloomers. Sometimes this happens to plants with ephemeral lives, which in the space of a few days , between winter and spring, go through their entire biological cycle. This phenomenon can also be attributed to rainfall which is concentrated mainly in cooler seasons, from late autumn to spring after which a  long dry period follows, and many plants enter a dormant stage losing foliage and concentrating their vital activities in their underground organs.

These modifications of the biological cycle entail specific adaptations of the vegetation which occur in various ways: with xerophytism, thickening of the leaf cuticles, pruinosity, glaucency, hairiness to reduce transpiration, therophytism; in other words the concentration of the biological cycle throughout the year, solely entrusting conservation of the species to the seeds which will mature in copious amounts the following year, with cryptophytism, that is the concentration of vital activities through underground organs, such as tubers , bulbs and root stock. Further complicating the combined actions of temperature and rainfall, are the winds, which in some cases are capable of inhibiting the development of certain species, and in others modifying their natural habit.

Finally, the high luminosity, comparable with that of alpine latitudes, is unique to the Mediterranean. Vegetation reacts also to this stimulus via specific defensive adaptations, such as the shininess of the leaves of the Lauro to reflect light radiation, the excessive exposure of which would be damaging to the normal photosynthesis’s cycle.

Other factors, such as exposure, inclination, geology and terrain structure, compete in making the mosaic of the Mediterranean environments extremely complex.

The San Lorenzo Valley, from the coast to the mountain peaks, is to be considered mainly Mediterranean as a vegetation type. In fact both in its spread and at high altitude the ground is essentially covered by Holm oak (Quercus ilex L.) or (Quercus pubescens Wilid) pubescent oak forests and woods or by lower more intricate formations, scrubland where shrubs predominate, or by garrigues, where extreme degradation of shrub vegetation is accompanied by a progressive destruction of the earth and by the surfacing of large areas of bedrock. When the vegetation is left to evolve naturally without interference by man, after a series of successive stages, it tends to reach a relatively stable final one called climax. The Italian variety and also that of the San Lorenzo Valley are represented by Holm oak forests (Holm oak forests are composed of trees which reach 15 metres in height with dense foliage which blocks out sun light reducing considerably the presence of weeds and shrubs on the forest floor, predominant are strawberry trees, Mediterranean buck thornn together with a number of climbing species like black byrony, smillax which climbs up shrubs and trees trying to create an opening towards the sun light. The vegetation of the Valley, like that of most of our peninsula, has actually changed due to human action and exploitation of the land, cutting, and the introduction of new cultures, have all deeply modified its original appearance taking it to stages of various levels of decomposition.

The primitive forests turned into woodland, which later became shrub-land, which eventually turned into garrigue, and on top of that there has been a problem with fires which have often destroyed entire  hectares of woods and shrubs. The original oak forests are no longer natural, but heavily reshaped by humans, leaving us  with trees which are much shorter due to cutting.

Holm oak forests can be replaced with pine groves. There are three types of pine which make up the groves: stone pines which produce pine nuts (Pinus pinus L.), maritime pines (Pinus pinaster Aiton) Aleppo pines (Pinus halepensis Mill). Stone pines are not actually spontaneous within our flora, but were brought by Etruscans or Romans from nearby Spain and spread as an ornamental tree.

In the San Lorenzo valley where the soil is mainly calcareousAleppo pines thrive, sometimes creating  actual pine groves accompanied by shrubs such as Piastacia Lentiscus, junipers or aromatic herbs such as rosemary, thyme and cystus. 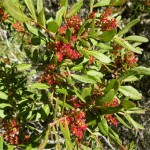 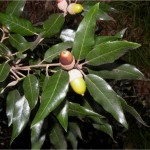 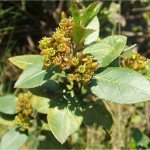 Type of vegetation composed of mainly evergreen, xerophyte shrubs, with leaves which are  either rigid, leathery, or reduced with small scales or absent, which grow densely huddled together creating intricate and impenetrable areas.

In most cases the San Lorenzo Valley shrub-land is a result of land degradation, mainly due to anthropogenic factors during the climax of evergreen oaks in primitive forests. The shrub-land can vary from one area to another both in structure (height and density of the brushes) and in floral composition. This extreme polymorphism is partly due to the type of substratum (calcareous, siliceous, sandy, rocky) from which the scrub grows, partly according to local micro climate. But above all it is  human activity (cutting, fire, grazing) the main factor behind the way the shrub-land presents itself today. The Macchia can be classified based on its predominant species: strawberry trees, junipers, Cistus, Pistacia Lentiscus. These different kinds of macchia (at high or low altitude) can therefore be considered forms of degradation, more or less extreme in a dynamic sense. When the degradation of the Macchia (Mediterranean scrub) is pushed to an extreme, a garrigue appears with shrubs reaching no more than 50 cm in height and quite sparse, which grow on rocky terrain where in large areas bedrock is visible. The garrigue like the macchia presents several different aspects also based on the function of the substratum on which it grows. Aromatic herbs such as rosemary, thyme, sage, juniper, thorny broom, euphorbia and cistus are very common. The garrigue flora is richer and more varied than that of the Macchia because the shrubs which cover it are extremely sparse and leave large areas where a number of both perennial herbs (mainly bulbous) and yearly herbaceous species establish themselves,  characterized by extremely short life cycles, and die by the end of spring after having abandoned their seeds to the ground.